A brief panegyric for my now departed green sweater

A brief panegyric to my now departed sweater.

Ironically, my iconic wool knit sweater was purchased in Florida before we moved to Nebraska.  A nice old lady accidentally did the best sales job of her life.  I placed the sweater on and took a few steps away.  She somewhat hesitantly said, “You look sort of like an eccentric college professor in that sweater.”  I immediately purchased it.

I cannot determine the precise point at which the sweater started functioning as a cipher for my personality.  That it did is beyond question.  I would occasional hear a passing suggestion that it was the source of my musical powers.  Like Elijah bestowing his mantle on Elisha, I would occasional temporarily bequeath the sweater to a student during an ear training test.  The place where my personality started and the sweater ended became increasingly difficult to define.

That it was pilling, had holes, was stretched out, and discolored was a source of contention.  I do have people that help to dress me in a presentable fashion – namely, my wife and our female friends.  Now, it is true that ever since a church mistook me for a homeless man and insisted on giving me a bag of food, I have tried to look a little more presentable.  However, on the matter of the sweater, I was absolutely impervious to criticism.  If a man can love a sweater, I loved that sweater; and I defended her imperfections with all my heart. 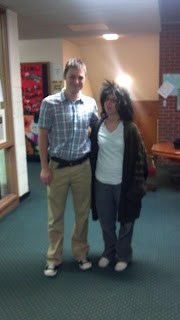 One of my favorite memories of the sweater was the Halloween when a student showed up dressed as me.  She was wearing an old sweater, a wig to make her hair look unkempt, and a wrinkled v-neck t-shirt.  I immediately confronted her saying, “You have not and will not ever see me wearing a v-neck t-shirt!”  She replied, “I’m sorry Dr. Knecht, I know,…but it was the wrinkly-est shirt that I had.”  “I see.” I replied looking down at my non-pressed “button down.”

More than a month had passed before I realized the sweater was missing.  After more than two years of my wife threatening to throw the sweater in the trash, I noticed it was gone.  When I asked if she had seen it, I received an evasive answer.  “What sweater?  You had a sweater?  I don’t remember…”  It was not long before I discovered that I had left it at a friend’s house.  Before I could retrieve it, my wife convinced our friend to throw the sweater away.

I know that I will eventually get a new sweater.  I know that I may even come to the place where I grow to love a new sweater, but the first sweater that I loved will always hold a special place in my heart.  That she was taken from my by wife and friend in an “intervention” style event obviously means that my relationship with her had grown unhealthy.  That it was an “intervention” only shows that I had a deep emotional attachment to that sweater.

Naturally, there are no 12-step programs to deal with sweater addiction.  Not that they would work for me.  I still can’t even admit that I have a problem.  As I deal with the mourning process, please feel free to encourage me by adding your own encomiums to the sweater in the response section.