Advice for conductors: What do you hear and how are you going to fix it? #1 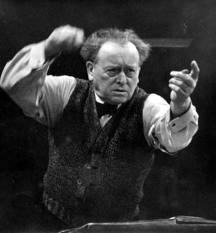 If there is anything that can make you better at doing something, it is watching someone else do it inefficiently. Of course, prolonged observation of poor practice is no guarantee that you will actually get better at something yourself. It may just turn you into the worst of all creatures – the critic.

I, on the other hand, get to watch a lot of bad conductors, and this has made me an expert on almost everything.

I was talking with Jo-Michael Scheibe one day, and he said that his whole approach to conducting was simple. “What do you hear, and how are you going to fix it?”  Like all true statements, it is at once both simple and profound. It’s also very difficult to do in real life. So here is the first of a series of rules to help you on the “fixing” side of the problem.

I learned this rule when I used to accompany for Robert Summer. It is very important.  SAY ONE THING AND FIX IT.  Bob used to say, if you say three things, people usually only remember the last one. Most people can’t even remember two things. Sometimes, tenors can’t even remember one thing. So, when you stop your ensemble, say one thing and fix it. After you fix it, you can say another thing and fix that.

Almost weekly, I see someone stop an ensemble or a student and then proceed with a laundry list of items that need to be fixed. Sometimes, the conductor just presents a list and doesn’t reasses to check if any of it is fixed. Sometimes the conductor does reassess, but becomes perplexed that not everything on the list is fixed.  No matter what the level of the ensemble, I have still found Bob Summer’s simple rule is still always best practice. SAY ONE THING AND FIX IT.