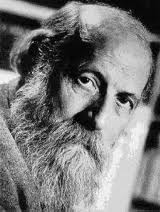 As some of the recent posts and comments have been swirling around, I’ve once again managed to stumble on an area that seems to raise controversy with artsy types. The question is, is there such an animal as aesthetic honesty. To be sure this is a complicated topic, and I will not attempt to cover it in one short blog post. However, I can begin the process of identifying the phylum. Here are some of Martin Buber’s thoughts on the subject:

“The act [of making an art object] includes a sacrifice and a risk. This is the sacrifice: the endless possibility that is offered up on the altar of form…This is the risk: the primary word [here he is talking about the Ich und Du as opposed to the Ich und Es relationship] can only be spoken with the whole being.”

It is especially this second part that is of interest in the question of artistic honesty. For Buber, there has to be risk in artistic creation, and the risk has to involve the whole being. Whatever may qualify as dishonesty, this does seem like a good starting place for a description. For example, when I first got that chance to get published, the publisher said, “We like this, and we want to publish it, but we need you to make the ending a little more Hollywood.” I was in my early 20s, and I wanted to get published, so I did it. It was successful, but I always feel a little dirty when I hear the revised ending. The key here is that I didn’t write the ending with my “whole being”, but specifically that part that wanted notoriety and success. The motivation was not speaking with my whole being. It was specifically done to avoid risk of any sort and make the music more consumable for the general public.

The difficult part of this question is still the fact that some people seem to honestly hear music and paint paintings, etc. that is very accessible. They do it in honesty. Some don’t. It’s hard to be honest when you hear difficult music. I also apparently don’t feel bad enough about the revised ending to return the royalty checks.