Aesthtics: St. Augustine and the beginning of the end of Plato 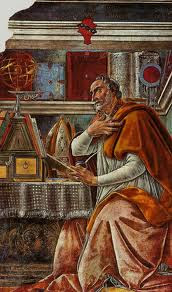 In De Ordine, St. Augustine seems to be under the full sway of Plotinus when it comes to the idea of artistic creation. He argues that you can get your soul “out of tune” by immoral actions.

“For to the soul that diligently considers the nature and the power of numbers, it will appear manifestly unfitting and most deplorable that it should write a rhythmic line and play the harp by virtue of this knowledge, and that its life and very self – which is the soul – should nevertheless follow a crooked path and, under the domination of lust, be out of tune by the clangor of shameful vices.”

So, we have some old world assumptions going on in this passage that need to be clarified a bit. Here they are.

1. The universe is a rational system
2. You get in tune with the universe by seeing its beauty and practicing “virtuous habits”
3. If you are “out of tune”, your art work won’t be beautiful (i.e. rational (i.e. in a balanced numeric ratio (i.e. moral))))
4. The process of creating art is not about “self exploration”, but is, in the old Pythagorean sense, a physical manifestation of the rational and invisible nature of the universe itself.
5. Once the “soul has properly adjusted and disposed itself, and has rendered itself harmonious and beautiful, the will it venture to see God, the very source of all truth…”
6. For St. Augustine, the terms beauty, rational, moral, and God are all very closely related.

Nothing in this is very distinctive when compared to Plato and Plotinus. The curious part happens in the conclusion. He says that once you see this beauty (by “living” “praying” and “studying well”), it won’t trouble you that “one man, desiring to have children has them not, while another man casts out his own offspring as being unduly numerous…one man hates children before they are born, and another man loves them after birth; or how it is not absurd that nothing will come to pass which is not with God…and nevertheless God is not petitioned in vain.”

It seems strange to conclude a chapter on aesthetics by talking about prayer. What is most interesting about this is that prayer becomes the focus of paradoxical thinking in Augustine’s theology. He explains his view a little more fully in book 5 of City of God.

“Now, against the sacrilegious and impious darings of reason, we assert both that God knows all things before they come to pass, and that we do by our free will whatsoever we know and feel to be done by us only because we will it.”

It seems to me that St. Augustine concludes the chapter in De Ordine by referring to prayer because for him, it is a mystical process that goes beyond the “impious darings of reason”. Ultimately, the irrational and mystical elements in St. Augustine’s thought will expand and bloom (after about a thousand years or so) to provide new models for discussing creative work. The crack in the Platonic armor will eventually expand wide enough for art to be considered something that reveals part of the self and not just a manifestation of the rationality of the universe.