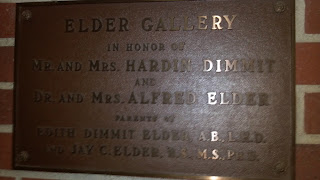 Upon seeing the plaque outside the Elder Gallery at Nebraska Wesleyan University the following occurred to me.

A man finds himself in the ironic situation of having the last name Elder when he converts to Mormonism.  Upon his mission, he is naturally referred to as Elder Elder.

When he has some sons of his own, they both go on a mission, and it is very confusing because there are two Elder Elders.  So, they begin distinguishing them in the ward by referring to one as the elder Elder Elder.

When each of the Elder Elders had two sons, the singles ward was bursting with confusion.  Since their fathers were well known, it was possible for the young Mormon girls to have the following conversation.