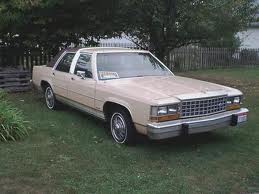 The Crown Victoria made her second attempt for fifteen minutes of fame some months later. After learning that a member of their family had married someone who had filled a car full of diesel fuel, Jennifer’s grandparents came to make sure everything was OK. Jennifer’s mother had come up for what might be called a “follow-up” visit.  We were living in an apartment complex on Skillman Avenue in Dallas.  It was (generously speaking) one step up from the ghetto.  The residents included ex-cons, drug dealers, and a few students.  We all got along, and when we didn’t, the cops made regular visits – occasionally with their helicopters – to ensure that the peace was being kept.  We had been out and about with Jennifer’s mother, and we returned to our apartment in the evening.

As we were walking her up to our pad, I was met by a 6’ 7’’ African American man with glasses who reminded me a little of Kareem Abdul Jabar.
“Hi,” I said.
“Hello.”
“Are you moving in downstairs?” I asked.
“Yes.”
After the brief and portentous encounter, we went upstairs to our place and spent the evening retelling stories of our car’s trip(s) to the repair shop(s) in Louisiana.  The next day we toured around Dallas some more and returned home again.  That evening, there was a knock at the door around 10:45PM.  I opened the door to find Kareem in a state of noticeable excitement.  I looked up his tall frame, and words began rapidly pouring out of his mouth onto my head.  “My name is Derrick.  I know you don’t know me, but you’re the only one here who’s even said ‘hello’ to me.  My wife Alicia is getting ready to have our baby, and we don’t have a car.  Is there any way you could take us to the hospital?”

We ran into the bedroom and asked Jenn’s mother the type of question that became typical of our married life together.  “Can you watch Zachariah while we take two strangers to the hospital?  This guy’s wife is getting ready to deliver her baby.”  She agreed, and we ran downstairs to the car. Alicia (whom I had not previously had the pleasure of meeting) was clearly in labor.  Derrick helped Alicia into the passenger seat.  She maintained a grateful disposition despite being in very apparent discomfort.  The back seat was full of junk that had remained unpacked after the move.  Jennifer made room for herself by pushing the debris to the side.  The only space left in the car for Derrick was a small area of the bench seat between his very pregnant wife and I.  In my estimation, approximately three feet and seven inches of Derrick’s six feet seven inches was torso, leaving four feet of legs.  Since he was bipedal, we had to fit a driver, a pregnant lady, Derrick, and eight feet of Derrick’s legs into the front seat of the car.  We skipped over the formal introductions and sped off as quickly and indirectly as possible.  Derrick’s legs were everywhere.  There were legs on the dashboard, on both floorboards, on the seat, and some seemed to be up around the rear view mirror.

The hospital was only about fifteen minutes to the West if you knew the correct route.  Derrick didn’t know the correct route.  Derrick knew the forty-five minute route.  Derrick and Alicia had just moved to our apartment complex from Oak Cliff on the Southwest side of Dallas.  We were all the way on the Northeast side of the city.  Derrick only knew how to get to the hospital from Oak Cliff.  Instead of taking the expedient route down Central, Derrick took us further away from the hospital toward the East. We picked up Interstate-635 – the loop that travels around Dallas and Ft. Worth.  I-635 is the “Lyndon B. Johnson Freeway.”   We followed LBJ south until the loop bent west and exited near Oak Cliff almost thirty minutes later. We then turned right and headed East again to make it to the hospital.

Around this time, Derrick brought me back to reality by recognizing a street.  After a few more turns, we arrived at the hospital.  Jennifer jumped out and grabbed a nurse who quickly brought a wheelchair for Alicia.  They took her inside, and the baby was born immediately.  About thirty minutes later, Derrick was sharing a cigar with me outside in the parking lot.
“It’s a boy!” he said.  “I’ve named him Delantrius.”
“Wow!  Is that some sort of Latin name?”
“No.  It’s after me and my friends.  The ‘De’ is for Derrick.  ‘Lan’ is for my friend ‘Lonnie’.  The ‘Tr’ is for my friend Trey.  The ‘Trius’ is for, like, the ‘three of us’, so ‘trius’.  Delantrius.”
“Well, that’s kind of cool,” I said.  I thought to myself that it was a good thing Lonnie wasn’t named Shiloh because then Derrick would have named his son “Deshitrius”.
“So,” Derrick continued, “the doctor said if we had been five minutes later, then the baby would have been born in the car.”  After I offered my congratulations again, Derrick and I spent some time actually doing more formal introductions.

Following our initial escapade, Derrick, Alicia, Jennifer, and I became fast friends.  Zachariah loved Derrick too.  If he ever dropped a toy off the balcony of our apartment, he could retrieve it by screaming, “DERRIIIIICK!!!!!!”  The giant 6’7” man would emerge from his cave below, reach down on the ground, and hand the toy up a full story through the guardrail.

Becoming friends with someone after you have driven them to the hospital for their child’s delivery is like a Chinese shar-pei.  There is something not quite right about it.  A fast emotional bond was established between the four of us before we really knew each other’s names, and it hung around like the extra skin on a dog’s head.  Our first double date was the mad drive to the hospital.  This probably explains the development of our continued service as taxi drivers.  Within a few months, I was getting up at around 4:30AM to take Derrick to work in Ft. Worth.  I would arrive back to the bedroom at around 6:00AM, sleep for an hour, and get up to start the day.  Eventually we lost contact with them.  It was strange.  We were very close to Derrick and Alicia for our stay in Dallas, but didn’t keep in touch when they moved to an apartment complex a few blocks away.  I probably shouldn’t have hoped for more.  Relationships that are begun on the seats of a car seldom last.