My son Zach answered an add in Craig’s list some months ago to play in a Southern Rock cover band.  He eventually talked his younger brother into playing in the band as well.  That my children play in a Southern Rock cover band in Lincoln, Nebraska only serves to confirm Avi’s profound assessment of his heritage:  “I got my sense of wit from my father and my good taste in music from my mother.”

We were sitting around the dinner table some time ago discussing their first gig.  It was to be at a biker rally in the small town of Seward, Nebraska.  I was already aware that the drummer – who submitted the Craig’s list add – went by the name “Ogre”.  I began to ask Avi if the drummer’s personal appearance was imposing enough to earn the moniker “Ogre”.  After a brief description, Avi concluded by saying, “Oh, and did I mention that he only has one eye?”

“No, not really, I was just teasing you.”

I’m still not quite over that.  My hopes were raised very high.  Avi knows how to lead me on pretty well, and I will take my revenge at some future point.

The day of the gig arrived, and Jenn and I decided to head to the biker rally at the 4H club in Seward.  Zach was kind enough to pass along a dress code for me.  I was to wear blue jeans and a t-shirt.  I was not to wear socks that didn’t match.  I was not to wear a lime green button down.  I selected a Rolling Stones crew t-shirt that my brother gave to Jennifer from his time working on tours.  Looking back, I’m not sure that Birkenstocks were the best choice for blending in at a biker rally, but they had me pegged as an outsider long before they saw my feet.

We arrived and sat in the front while the opening band was playing.  Avi and Zach came up and pointed Ogre out to us.  Eventually, Ogre made his way up to where we were sitting and introduced himself.  Shortly after meeting him, he said, “I have to go.  One of my brothers is getting married.”  (By “brothers”, he meant one of the other members of the “Nebraska Tribesmen” biker club.) 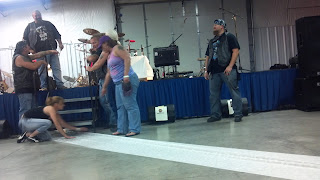 He stepped aside and a couple of biker ladies appeared stretching a paper runner down the bare concrete floor of the 4H club.  It went from the main door to the band stand.  Some music started playing on the sound system and a couple of bikers walked up on the band stand in their traditional clothes.  Black leather jackets over t-shirts, blue jeans, tattoos, lots of pins in the jackets, and amply amounts of facial hair.  The music continued and the maid of honor appeared walking down the aisle with a small bouquet of flowers.

She was wearing pleated shorts of a sort that I had never seen before.  They had rings of pleats that ran horizontally around the shorts.  There were perhaps 10 pleats in all.  As I searched for a description in my mind, I leaned over to Jenn and asked, “What to you call the kind of shorts that she is wearing?”

“I call them a ‘lampshade’.” she replied.

The pleated shorts were complimented with a black tank top that allowed a plentiful view of her more than ample bosom.  As she was baring so much cleavage coming down the aisle, I briefly thought of the newly released UNL study on the way that women are objectivized into their sexual body parts.  I think I did not objectivize the lampshade.

As she arrived on the bandstand, the officiant began.  After a few incomprehensible sentences, the biker gang and their lady friends all started shouting that he needed to use the mic.  He took it and began the service again.  There were a few words of introduction, and it was time for the couple to make promises to each other. 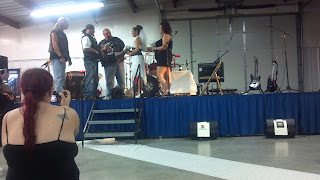 (You can see in the photo that the wedding photographer was thoughtful enough to wear a matching top that complimented the maid of honors’ haute couture.)

For her part, the bride had a chair brought forward and asked her affianced to be seated.  Immediately, people began shouting, “Is there going to be a lap dance?”  “Give him a lap dance!”  She took the mic, and music began playing on the speakers again.  Something went wrong and they had to start it over.  The music began a little softer, and the bride – instead of pledging her troth – sang “From this moment”.  The mic fed back right on cue.  It was like a Hollywood movie.  The singing was bad and out of tune like you might expect, but that wasn’t the weirdest part.  There is a point in that song when a modulation happens.  During the modulation, she wasn’t even singing.  She was taking a breath or something.  Nevertheless, when the modulation happened, all the bikers and their biker ladies started cheering for the modulation on the recording.  I’m still not sure what that means.  She came in for the last chorus and broke down as she was singing.  Her biker lady tears got the best of her, and her singing turned into choking sobs that were quite touching.

With her troth now thoroughly pledged, it was his turn.  He took the mic.  In a gravelly voice he said, “I’m not going to sing.  We’ve been together for a long time.  Nine years.  We’ve been through a lotta shit.  You’ve always stood by me.  I love you.”  It was not romantic in the traditional sense, but there are some aspects of biker culture that are terribly unfamiliar to me.  There is certainly a candor and honesty that I think everyone should appreciate.

The officiant said a few sentences.  They exchanged vows.  There was a kiss that was a little longer and more French than you might see at a traditional wedding, and it was done.  He pronounced them “Missy and Abram” and they left.

As my children began getting their gear set up on the band stand, I unfortunately turned away and missed what had to be one of the more exciting events of the night.  Avi’s girlfriend assured me that the man running sound – everyone called him “Tiny” – had for some incomprehensible reason removed his prosthetic leg on stage and then put it back on.  Shortly after, the sound check was interrupted for an announcement.

The bride reappeared in her reception outfit.  Ripped bluejeans were supporting a tightly fitted black corset.  She had her own biker lady jacket that said, “Property of Abram” on the back.

The kids played really well.  I sat in the front row and wore neon orange earplugs.  One of the bikers even complimented me for wearing them.  I’m not sure what that means either, but on this night I was grateful for anything that didn’t result in bodily harm to my person.  A compliment on earplugs from a burly biker was just gravy on top.  When they finished their second set, we made a quick exit before the wet t-shirt contest began.

As we drove home, Jenn and I reflected on how many times we have managed to wind up in these surprising situations.  I also complained that we didn’t have a wet t-shirt contest at our wedding reception.  Come to think of it, we didn’t have a silent auction either.