Gigging stories: Foreplay at a funeral 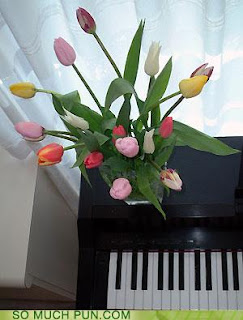 I called the funeral home and told them I was available to play the service. The woman said, “Great! Could you call the husband. His name is Hans Kraus. I will warn you, he has a very thick accent, and he’s hard to understand.” “It’s OK, I replied, I have enough German to communicate with him.” “Oh, that’s great,” she said. “Well, give him a call, he’s very anxious.”

I dialed the number and heard his very German sounding, “Hallo.” I responded in my best German, “Hallo. Here speaks Kurt Knecht. I am an organ player. I can play for the ‘Godly service of sorrow’ for your wife.”
“This is wonderful!” he replied. “Are you from Germany?”
“No. I am coming out of America. It does me great sorrow, but my German is very poor.”
“But you have a German name.”
“Yes. My parents are Lutheranish, and therefore have I a good German name.”
At this point, Hans sped of in such fast German that I couldn’t keep up. I asked him to switch to English. He told me about his wife and his determination to go on with life despite the loss. We agreed to talk in a few days to finalize the funeral plans.

When the call came on Thursday night, we exchanged a few pleasantries in German, and he began talking about the service. I said, “Oh, Herr Kraus! We have to do this in English. I want to make sure we get it right.”
“Ah, OK. Koort, wass I am sinking is zat as people are comink in, you will be playing some moosick, und zis I have labeled in ze program as ‘foreplay’.”
My mind began to race. I realized what he had done. In German, the word spiel means “play”. You simply attach the prefix vor to indicate the “playing before”. Herr Kraus had chosen the direct method and had translated the word vorspiel as “foreplay”.
“Oh…Herr Kraus,” I said, switching back to German. “This word means something very different in English than it does in German.”
“Ah…yes…,” he replied switching us back to English. “I am familiar.”
“Why don’t you use ‘prelude’ instead?”
“Zis sounds much better!”
“Yes. Um…Herr Kraus…do you have ‘afterplay‘ written too?”
“Ja.”
“Why don’t you try ‘postlude’. That’s what we normally use in English.”
“Zis sounds better too!”
The funeral home was so grateful that I had caught the mistake. It turned out that he was on his way to Kinkos to have the programs copied. He decided to call me first, “just to confirm a few details.”

My only regret is that the mistake didn’t go through. If I ever had a copy of the original funeral program that said at the top, “Foreplay by Kurt Knecht“, I would have had it framed.