Gigging stories: how I became a composer 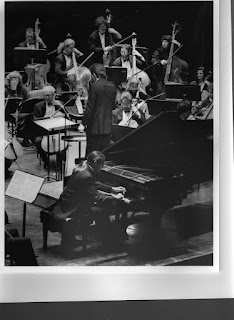 Part of my prize in the Florida Orchestra’s Young Artist Competition was the opportunity to perform the third movement of the Ravel G major Piano Concerto three times with the Orchestra. We were to play two “Coffee Concerts” and one evening concert. Each concert was given in a different performing arts center in the tri-city area. Aside from the thrill of being a young performer playing with a professional orchestra, I had a handsome check in my bank account.

The “Coffee Concert” is something that has largely vanished from the concert scene. Budget cuts have necessitated the scaling back of orchestral performances. Back in the day, some orchestras had concerts that were not part of their masterworks series that happened in the mornings. The idea was that if you were going to listen to orchestra music in the morning, you needed some coffee first. The music for the “Coffee Concert” was the light and fluffy spinach omelette of the repertoire – because no one should have to suffer through Wagner before they are fully awake and cognizant of what is happening to them. It wasn’t a pops concert, but you also weren’t likely to hear Mahler.

The audience for the “Coffee Concert” was made up of two distinct castes. The minority faction was peopled with wealthy, aged ladies who like to spend money on the orchestra. Most of them didn’t like music that much, but they liked the idea of liking music that much. The larger portion of the audience was drawn from the elementary school children who were bussed in for the furthering of their education. Principals, were encouraged by their music specialists to send the kids to the orchestra. The principals got a breather for a few hours as the violins sawed away at the children’s musical ignorance.

I waited in the wings that morning while the orchestra played Ravel’s Mother Goose Suite. As I was listening, I reconsidered the morning concert. It was actually quite lovely to start the day by listening to a live performance of Ravel. I thought of the elementary school children in the audience. I remembered when I was bussed down to the theatre to hear The Young Person’s Guide to the Orchestra at that same age. I had managed to smuggle a McDonalds straw in my pocket. I chewed up my program bit by bit creating spitball munitions which the straw sent through the air towards students of other elementary schools as Peter was capturing the Wolf.

The Mother Goose Suite ended, and I prepared to take the stage during the applause.
One of the two stagehands delayed my entrance saying, “Wait a moment. We have to raise the piano.” I noticed as I glanced at the backstage monitor that the piano was positioned in the pit. The pit was in the lowered position, ten feet below the orchestra. I should have been alarmed immediately because the stagehands were the wrong type. The normal profile for a union stagehand is someone who found him/herself not quite talented enough to be in the spotlight. Not having the capacity to do, they become experts on how to do. They even seem to know more than the people that actually do and develop a pretentious attitude toward anyone who might slight them. They retain their connection to theatre life vicariously through operating the spotlight that they wish enshrouded their own body. They usually retain their artistic haircuts and black turtlenecks.

I have found that it is best to stroke their egos with some symbolic gesture when preparing for a concert. A public compliment will go a long way. Asking for permission or help for some detail of set-up can also work. If one of the tech people decides that they don’t like you, they can ruin a show. They will turn off your monitor so that you can’t hear. They will adjust your position and claim that the lights won’t reach you where you would like to be placed. The two stagehands at this coffee concert were clearly non-union. Instead of turtlenecks, they wore flannel shirts. Instead of the usual black pants, these two wore the creepy kind of polyester pants with the button that is slightly to the side. If they had made a previous attempt at a career in theatre, it would have had to occur more than sixty years before.

An uneasiness about their competence began to grow in my belly as they began to work toward getting me on the stage. One of the men fumbled in his pocket momentarily. He pulled out a small flashlight and turned one of the ends causing the bulb to shine. He walked over to a wall about ten feet away in a manner that stirred up childhood memories of watching Tim Conway playing the part of an old man on the Carol Burnett show. With his feet dragging, he inched his way ever closer to a box on the wall where his flashlight revealed two large buttons. I remember something awkward about the way he stretched out his thumb and mashed the top button. Instead of extending his arm, he used his waist as a fulcrum and bent his upper body to depress the circle labeled “up.” A dialogue between the two men began, and I had to reconsider if they had ever attempted a career in theatre. The lines sounded like something from a previously undiscovered Ionesco play.

While this interchange might have been amusing in the proper context, I was beginning to experience great anxiety as their conversation kept catching in the same groove. I was also reaching the conclusion that “someone had turned it off underneath” and that another “someone” should probably be called to “turn it on underneath.” This same conclusion, however, did not seem to occur to the non-union stagehands. Fortunately, the stage manager from the orchestra had reached a similar conclusion, and he appeared next to the monitor watcher and picked up a phone. While we waited for the apocalyptic piano to rise up from the pit, I turned my attention to the stage.

As the applause for Mother Goose withered, the conductor of the orchestra found himself in an awkward position. While stalling for time is part of the natural repertoire of musicians who play in clubs, orchestra conductors are on very unfamiliar terrain when traveling that particular path. He was walking across a dark room toward a light switch knowing that his toe was going to get stubbed.

“Um…OK…I, um, see that the piano isn’t up yet…um, well…I know we have some elementary schools with us here today…um, can we, maybe, bring up the house lights a little…and, um, what schools do we have here today?…Hi, yes…what school are you from?…Azalea Elementary, wonderful…and, OK, you…what school are you from?…The Nina Harris Exceptional Student Education Center, wonderful…and, what?…one of your students has a question…sure, what’s your question?” He seemed genuinely relieved that someone else was providing the material for filling dead space. “…will we play a song for you?…well, um…the orchestra is not generally in the habit of taking requests at our concerts.” Momentarily, it seemed that allowing others to provide stalling material had become a rather pyrrhic victory, but with the piano still in the pit, he had few options. “well, um…what song did you want to hear…really?…you know, the orchestra knows that song…let’s all stand.” He turned, the audience and orchestra stood, and they launched into the national anthem. It was as good a stalling song as any, and probably the only tune that all eighty members of the orchestra could play from memory together. By the time the bombs had burst in red air, the piano had made its sinister climb from the abyss. Now, clearly very relieved, the conductor easily said, “I see the piano is ready, and now we will bring out our First Prize winner from the young artist competition, Kurt Knecht.”

The Ravel G major is a piece that musicologist say is “jazz influenced writing.” It’s not the sort of jazz that we as Americans think of as jazz. It’s jazz that has been julienned and braised with pearl onions in cabernet sauvignon by a French chef. The buoyant rhythms and jaunty gait of the tune fly on incessantly as soon as the conductor fires the starting gun. Pianistically speaking, there are some passages that require the hands to be placed in very awkward overlapping positions. There are also scalar passages that can only be mastered by persons willing to play them for hours on end until they become as automatic as breathing. The final difficulty is maintaining coordination with eighty other people who are also tearing off virtuosic passages on their own instruments. Maintaining concentration can be extremely challenging. It was especially challenging on that morning because one of the orchestral soloists had played a solo passage one bar early. The premature entrance required all of us to ignore what we were hearing and steadfastly believe that the other seventy-nine of us were actually with the conductor. One confidently wrong musician can throw an entire ensemble to the ground.

As I bounced along through one of the more difficult passages, I heard something I had never heard at an orchestra concert before. There was clapping in the middle of the piece. I couldn’t be sure my ears were bearing true witness at first, but it continued. Someone was clapping along to the beat as I pulled sound out of the instrument by the sweat of my brow. “Who in the world would clap along to the Ravel Concerto?” I thought. I soon realized that it was one of the students from the school for exceptional children. It was, perhaps, the single most beautiful performing moment I have ever experienced. There was a child who lived unencumbered by the social morays that hold back the non-exceptional. We were playing together so well that we could make a mental handicapped child clap along to the beat. He was responding with an enthusiasm that couldn’t be contained by the proscribed audience behavior.

The event was a cathartic moment for me. When I had finished the evening concert later that night, I was finished with the piano in some sense. I remember thinking, “OK. I’ve done that. Now what else can I do?” It wasn’t that I was going to give up the piano or stop practicing altogether. It was that I wanted to become a musician. I started practicing the organ vigorously after that concert. I also decided that what I really wanted from my musical life was to be a composer. Instead of practicing for three or four hours a day, I started focusing on being a composer first and a pianist second. It seems odd at times that my first big success as a concert soloist was the basis for studying composition in earnest. The thing was, I had to learn something that was more valuable to me than playing the piano.

After that morning, I knew two things. I didn’t want to play in places with non-union stagehands, and I wanted to learn how to write music that could make mentally handicapped children clap.