Improvising my way out of a paper bag #7

The day began with “Currents”. It’s a sort of new age thing but it’s mostly in 9/8. We had a few takes and moved on to a wild animal of Jonah’s invention that we call “Hanon from Hell”. It’s a diabolical little octatonic thing  with a rather ingenious constuction. It’s a repeating 8 note pattern in 7/8. It’s constructed in such a way that as the pattern spins out, the first note of each measure plays the theme of the first measure in augmentation.

After a lunch of Vietnemese sandwiches and bubble tea, we played the one we call, “The clustery thing”. It’s mostly a slowly moving tone cluster that uses a special effect of the tracker organs. I play tenths in the pedals and slowly crack the pallets open, and it creates spectacular sounds as the tones slow emerge
as they are gradually provided with the requiste air to acheive pitch.

We then moved on to a little thing we had been calling “reflective ground”. It’s a ground of Jonah’s invention that is some quasi modal 1st species counterpoint. We had been playing it as a modal Coplandy kind of thing, but after playing so much modal stuff during the morning, Jonah went with a wild hair and began some adventurous bitonal, phasing, and crunchy playing. I was a little doubtful about the choice, but I have learned to trust Jonah’s musical instincts over the last two weeks. I went with it. In the final take, I don’t think I was adventurous as he was, but it may work. The juxtaposition of freedom over stability wound up having an appealing quality. I’m still not sure about everything that I did, but I certainly like what Jonah played.

With a little extra time, we went back to the “B majory thing”. The final take is really beautiful, and I think it may be one of the centerpieces of the album.

In the end, I am simply overwhelmed with excitement about the whole project. I can’t wait to share some of the project with the public. I am super humbled to have been asked to participate by a musician of such amazing ability and pedigree. Jonah has been a fantastic partner to work with. Our sound engineer, Logan, was dilligent and industrious.

It’s been especially meaningfull because of the chance to break out of many of the things that I normally do. I have been wanting to do a musical project that expresses some of the more diverse listening that I do. Sometimes the process of writing for specific events and commissions precludes utilizing all the musical input that I am receiving. I have specifically been wanting to do something that uses more  world percussion for a while. I didn’t exactly expect to find it in a digital tabla box. I also didn’t quite expect my desires to be fulfilled with viola and organ improvisations.

The best part is that this thing is so unique that it may be appealing. In the history of the world, I don’t think anyone has ever made a recording of viola and organ improvisations with a digital table box. As we get some clips, I promise to post them. 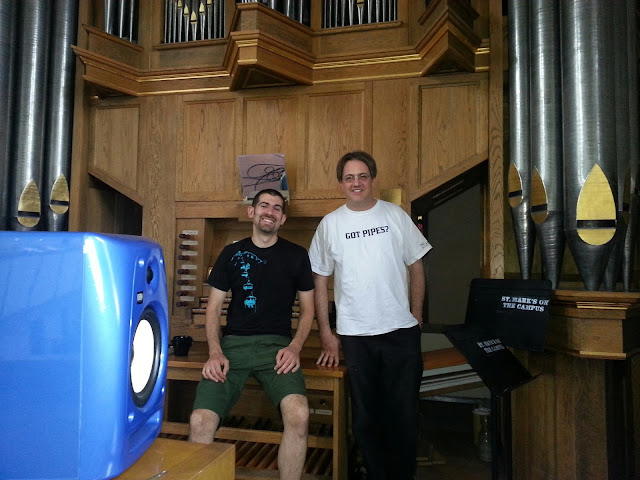