In response to Bob Woody 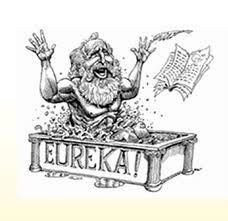 The internets are all worth it if I get to interact with such a fertile mind as the one Bob Woody carries around in his skull. You can read his response to my last post here. Let me say a few things in reply.

I am certainly not opposed to technique in any sense. In fact, I try to bathe fairly regularly. I do take breaks quite often when doing creative work, except when I don’t. My problem happens when we slip from observing the creative process to prescribing the creative process. I have no problem with telling a student to take a bath. It might very well work. It might just as well not work. To suggest that we have a formula is my big issue. It would be like saying that since Martin Luther had his biggest spiritual revelation on the toilet that we suggest that going to the bathroom is a proven technique for spiritual enlightenment.

I would also suggest that not as many researchers have the same sense of humility as Dr. Woody. There is certainly a problem in the way the media reports research compared to what the researcher actually says. I have a close friend who is a structural biologist. He does research on protein that relates to Parkinsons disease. When some press came out about his research, he had people calling him on the phone for a cure. I think that too often observational research on creativity becomes the same sort of thing. People look to it for a cure instead of a record. I think we can be informed by that record and should be, but it is not a cure. I also know that many researchers move toward subjects that get media attention because it gets grant money. When Bob suggests that “Any researchers worth their salt are careful not to overgeneralize or oversimplify their studies’ findings”, I think he is a little more generous than he should be. That is exactly what many researchers do in order to get funding and media attention.

Ultimately, I do not disagree with any of Bob’s comments. I think we are probably coming up against fundamental disagreements about epistemology. That’s not necessarily a bad thing. It may be the very thing that makes me a composer and Dr. Woody a scholar. Since I tend to be a very committed anti-rationalist in epistemological matters, I tend to value wonder over scepticism. Wonder is awfully hard to measure. It’s also harder to talk about than concrete things like taking a bath. So, the Ionesco in me wants to respond by asking: How long does the bath need to be? Do I need to use a certain kind of soap? Also, should I wash my hair first or last?

We really need to measure all of these things and find which kind of bath works best. Then I can make sure to take that kind of bath in the middle of my next blog post. Think of how much more insightful and creative I will be!