Leaving our tonal ears at home with David Hasselhoff

To enrich our discussion of post tonal music, I had my class read an interview that Edward Cone did with his former teacher Roger Sessions. In the article, Sessions tells an anecdote about an interaction with Schoenberg. Sessions says to Schoenberg, “I hear this movement of your string quartet in d minor.” Schoenberg says, “No you don’t. You just hear the interrelation of the pitches, and you associate that with d minor.” I’m paraphrasing, but that’s the gist of it.

A discussion ensued that had already come up several times in the semester. A particularly bright grad student told me that Joseph Strauss calls them “tonal puns”, and further said, “We can’t leave our tonal ears at home when we listen to this music.” When we hear tonal analogies in atonal music, it is like looking at this picture of David Hasselhoff. You can’t unsee it. 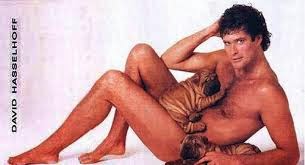 In the same way, it is terribly difficult to unhear tonal puns. The deeper question is what exactly are our “tonal ears” and what are we saying when we find tonal analogies. If we can’t help but hear tonality in the music, it might seem to point toward some inherent tonality in the structure of music itself. That is certainly the argument that was made for many years – usually using the harmonic series as the underlying structure for the polemic.

I immediately asked the class what they understood as their “tonal ears.” Did they mean that if I played them a piece of “conventional” tonal music, that they would be able to immediately notate all the pitches accurately? They clearly did not think that, and I don’t think that is they case except for the extremely gifted. So, what are we hearing? My guess is that we are occasionally hearing vertical sonorities as triads. At most, we are hearing a few measures as “tonal puns”.

We looked at the Simbolo from Dallapiccola’s Quaderno musicale di Annalibera a few days ago. We discussed the fact that the first phrase ends on an a minor chord, the middle of the piece has an E major chord, and the piece ends on an a minor chord. I’m not convinced that we hear the piece in a minor. I think we hear the pun, but if tonality means anything, it has to be a deeper set of relationships than an isolated vertical sonority. It even has to mean something deeper than an isolated set of measures. If that is the case, what exactly is going on here, and is it possible to leave our tonal ears at home and unsee David Hasselhoff? I am hoping so, but I’m not sure if it is possible.