Love Song or A Prufrock unto myself 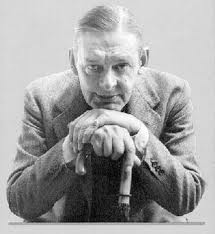 The context for the encounter was appropriately sad.  A beloved English professor had been forced to retire because of poor health.  The honors program at the University decided to give him an award, so they called the students in the honors program and invited us to a reception.

At my University, it was virtually impossible to be a music major and complete the requirements of the honors program.  Most music majors graduated with around 140-150 hrs of credit.  That number didn’t really reflect the fact that my lessons only counted for two hours of credit, but I was practicing three to five hours every day.  I still signed up to be in the honors program though.  I wanted the option to take classes that had long titles like “Asia and the West:  perspectives on life through literature and art” or “Kierkegaard’s influence on Tillich and the Niebuhr brothers”.

I showed up to the reception as an outsider.  I had taken a few honors courses and one with the retiring professor, but I wasn’t in the circle of students that lived in the honors program.  I saw a table of students, and I recognized two or three from one of my classes.  I sat down and joined in the conversation.  I was introduced to a redheaded girl across the table, and we began to chat.

Like all conversations among young intellectuals, the conversation could move from highbrow to the gutter with astounding alacrity.  Erudite debates on epistemology come crashing down into fart jokes only to rise again with the next wave of topics.  The professor being honored was quite late to his own reception so there was time to talk.  I jumped into the water and began talking with the redhead.

She was a creative writing major, and she was mostly interested in poetry.

“Well, I like a lot of different people, but Eliot is probably my favorite.”

“Well, I like most of them, except the cat poems, but if I had to pick one, it would probably be “The Love Song of J. Alfred Prufrock.”

At this point, we excitedly started a “quote off”

I looked across the table and said,
“Let us go then, you and I,
When the evening is spread out against the sky
Like a patient etherized upon a table;”

She looked back at me and replied,
“In the room the women come and go
Talking of Michelangelo.”

I said,
“I should have been a pair of ragged claws
scuttling across the floors of silent seas.”

I naturally replied,
“I grow old … I grow old …
I shall wear the bottoms of my trousers rolled.
Shall I part my hair behind? Do I dare to eat a peach?
I shall wear white flannel trousers, and walk upon the beach.”

It was right at this point that one of those drastic conversation shifts happened.  Our connection over Prufrock would have to be put on hold because the important topic of conversation at the table had turned to how perfectly awful Lisa was.  Everyone at the table had something to contribute.

“You won’t believe what happened the other day.  We were in Shakespeare class and she was smacking her gum like she always does, and then…”

“Do you know what she did last semester?  Ok, so she had made a list of all her enemies and brought it to class…”

The stories continued.  There were about 10 people at the table.  I desperately wanted to fit in with the group.  I wanted to impress the Prufrock girl.  It was vital that I think of something bad to say about Lisa.  The problem was, I didn’t know Lisa.  I had never been in class with Lisa.  I continued to listen, but became progressively frustrated that I had no fuel to pile on the Lisa fire.  I sulked quietly on the edge of the conversation vainly racking my brain for some memory.

In an instant, the memory came back.  In the Fall semester of that year, a girl that I didn’t know had taken my number out of the honors program directory.  She called me three separate times and asked me out on a date.  I rejected her each time.  Her name was Lisa.  This would be pure gold for the table. I thought,

I returned to the conversation in triumph.  I looked across the table at the Prufrock girl with a smile and said very loudly, “Oh!  I know the girl you guys are talking about now!  I think I know who Lisa is.  Isn’t that the girl that kept calling me over and over again last semester for a date, but I kept rejecting her.  It was really awkward.  She just kept calling no matter what I said.  Isn’t that the girl?”

In an instant, the entire table became as quiet as a pair of ragged claws scuttling on the floors of silent seas.  The redheaded Prufrock girl looked at me with eyes that fixed me in a formulated phrase.  “No,” she said very sheepishly, and clearly flushed.  “That was me.”

I was pinned and wriggling on the wall wondering how I should begin to spit out all the butt-ends of my days and ways.  The dreadful silence at the table spoke to the fact that everyone else seated there was quite aware that the redheaded Prufrock girl had made several amorous attempts in my direction.  I made a poor attempt to feign a lack of maliciousness.  “I…was…just asking…for…the purpose of…finding out if….for information…purposes.”  My voice trailed off.  I didn’t believe what I was saying anymore than anyone else.  Fortunately, the awkward silence was broken by the arrival of the professor.  At the end of the presentation, I quickly slipped away.

For the next 2 years, the redheaded Prufrock girl would not look at me when we passed each other on campus.  I would see her purposefully avoiding me and think, “What was I thinking?  Why would I start quoting a melancholy poem about a lack of ability to make real connections with people?”

In my last semester of undergrad, I had submitted a poem to the student literary journal.  It was an act of courage.  I had submitted a poem my freshman year.  I heard that there was a meeting where they were discussing submissions.  I wandered around an old hall till I found the room.  I was getting ready to enter when I heard someone reading one of the lines of my poem.  The only line I can remember was from a poem about the moon that used the phrase “a tear in the night’s dark”.  They read that and burst out laughing.  They were going through the poem I had written line by line and laughing at each sentence.  As my creative confidence began to collapse in on itself, tears came to my eyes and I quickly exited the building.

About a week later, I went up to a computer lab to type up a paper.  The lab was full except for one seat.  As I began walking toward the seat, I noticed that Lisa was sitting at the adjacent computer.  I took a breath and sat down.  I turned to Lisa and said, “Hey, I don’t know if you remember or not, but about three years ago…”

She interrupted me quickly and painfully said, “I remember.”

“I see…well…I just wanted to say that I’m really, really sorry.  I feel bad about it all the time.”

“Thank you, and thank you for letting my poem go in the journal.  That is really amazing of you.”

When the journal was released, we had a reading.  Lisa and I even hung out a little afterward and had a pleasant conversation.  It was nice.  It was clear that we would never be fast friends, but there was a genuine reconciliation.

I bit of the matter with a smile and made a vow to never recite Prufrock with a girl again.