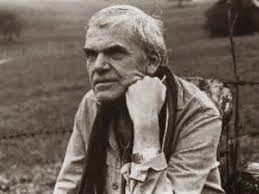 This bit is quite thought provoking.

From The Book of Laughter and Forgetting:

“If it is true that the history of music has come to an end, what is left of music? Silence?

Not in the least. There is more and more of it, many times more than in its most glorious days. It pours out of outdoor speakers, out of miserable sound systems in apartments and restaurants, out of the trasitor radios people carry around the streets.

Schönberg is dead, Ellington is dead, but the guitar is eternal. Sterotyped harmonies, hackneyed melodies, and a beat that gets stronger as it gets duller – that is what’s left of music, the eternity of music. Everyone can come together on the basis of those simple combinations of notes. They are life itself proclaiming its jubilant “Here I am!” No sense of communion is more resonant, more unanimous, than the simple sense of communion with life. It can bring Arab and Jew together, Czech and Russian. Bodies pulsing to a common beat, drunk with the consciousness that they exist. No work of Beethoven’s has ever elicited greater collective passion than the constant repetitive throb of the guitar.

…there is a certain primordial state of music, a state prior to its history, the state before the issue was ever raised, the state before the play of motif and theme was ever conceived or even contemplated. This elementary state of music (music minus thought) reflects the inherent idiocy of human life. It took a monumental effort of heart and mind for music to rise up over this inherent idiocy, and it was this glorious vault arching over centuries of European history that died out at the peak of its flight like a rocket in a fireworks display.

The history of music is mortal, but the idiocy of the guitar is eternal. Music in our time has returned to its primordial state, the state after the last issue has been raised and the last theme contemplated – a state that follows history.”