My adventures in business lead me to confront Maslow 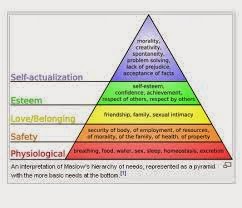 One of the things that has surprised me during my Summer adventures as an entrepreneur is some of the vocabulary that gets used in the business community. In several of the lectures I’ve heard, and several of the books Jenn and I have read, Maslow’s “hierarchy of needs” is regularly referenced.

At first I thought it was just another piece of the overly patriarchal culture that is the start-up community. I mean, we are all happy that Maslow started talking about the fact that people have other needs than just physical ones, but why is this old washed up theory still bouncing around the business community when it is a relic of the 1950s in the academy.

I well remember laughing about it as an undergrad. How wonderfully systematic Maslow is without really telling you much. I mean, for Maslow, you aren’t allowed to start working on your relationships until you’ve filled in the bottom of the chart. He never really does tell us how much food you have to eat before you are allowed to fall in love, but no matter, the point is to work through the steps until you get to self-actualization. Of course, when you get there, it gets complicated too. All Maslow does is give a list of characteristics of people that are self-actualized, and then he says, “Well, just because you have the characteristics that are on the list, it doesn’t guarantee that you are really self-actualized.” I suppose ultimately, you would have to ask him if you were cool enough to be in the club.

Now the interesting thing is that the business folks are using it by saying something like, “People aren’t just motivated by money, they need to have a sense of belonging and ultimately a sense of calling.” I pushed the issue the other day in a discussion for a moment and later decompressed with Jenn.  Finally, I realized what is happening and why I keep seeing the Maslow chart so much.

The business people who keep referring to the chart have never actually read Maslow. They are using it as a reference point to give weight (and presumably some sort of academic cred) to their point that people are motivated by more than just money. Of course there is no empirical research to back up Maslow’s theory, and when I was trying to explain something, someone said, “But, you don’t have to wait to work on the meaningful parts of the triangle until you have finished working on the physical parts of the triangle.” I said, “I agree, but that’s not Maslow.”

It’s an interesting world. I spend my academic life in discussions where people are referencing thinkers and traditions in order to summarize large fields of thought quickly. When someone says Maslow, they mean Maslow. It is the great strength and weakness of the business world that the overarching pragmatism can mean creating a short hand without ever consulting the original source material.

Again, for all the textbooks that use the hierarchy of needs chart, I think they are well meaning but have picked the wrong theorist for their point. It’s all good though. As for me, I’m going to keep eating so that I don’t slip down the chart, fall out of love, and have to start all over again.