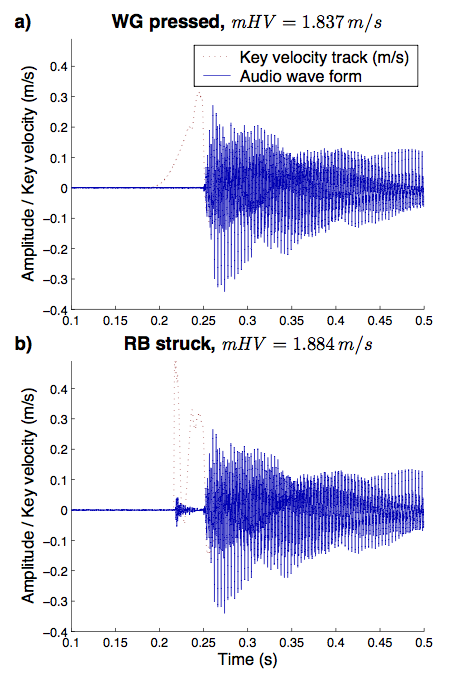 At least once a year I wind up in a friendly discussion with a pianist (usually several) because I don’t believe in such a thing as “touch” or “tone” on the piano because PHYSICS! My pianists friends then rally behind each other with the argument that the laws of physics don’t apply to their well-trained and sensitive hands. (Incidentally, this is not an issue amongst organists. Nobody ever says, “Oh, what a touch you have! You really made that 8′ Block Flöte sound so warm.”

Well, my good friend Paul Barnes sent me a link to a new study on piano tone the other day. You can read that article here. So now we have a new study by two musicians to further confuse people on the topic. Even this article doesn’t address whether or not the “tone” of the piano changes. It basically argues that musicians can hear the fingers hitting the keys when they play faster. Whether that is true or not would depend, I suppose, on whether the air conditioner is running in the hall.

The article goes on to suggest that it only works when you play one note at a time. When you play multiple notes, musicians get confused. It’s really a shame for the authors of the study because all the best music I know has more than one note in it.

Fundamentally, this is not the argument that I understand many pianists (including some of my former teachers) to be making. That is, they argue that by your “touch” — by which they usually mean the pull or push of your finger — that you can make the piano sound “warmer” or “have a more singing tone” or some other nonsense like that.

One piece of good news is that our ears must be getting better. I remember Hindemith commenting somewhere on a study from his time when people couldn’t tell the difference between a concert pianist playing a single note and someone playing it with an umbrella. It could also be that our recording technology is better, but I like to think we can hear better than Hindemith.

It’s a shame that musicians did the study and not physicists. Of course the next step for their research will be to get a real experiment going. I’m going to suggest that they get Lang Lang, Jeremy Denk, and either a baboon or a bass trombone player. Let each of them “press” the key once at the same speed and let each of them “strike” the key once at the same speed. Then, mix up the six recordings and see if we can tell the difference between the “touch” of each player.  If we can tell the difference, I’ll get to work writing the best one note piece of music that you ever heard.