Since people have been asking about my socks, you can blame Jo-Michael Scheibe 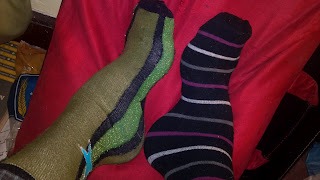 Of all the creatures in the bestiary, my socks are the most promiscuous.  In spite of my constant moralizing, they consistently shirk convention and become intimate with new partners each week.

After many years of sermonizing, I finally gave up and decided to leave them to their own fate.  So they wallowed in the cesspool of their own debauchery without much attention from the outside world. They were all the same color.

One fateful day, I bought a pack of pastel socks for Spring.  When they were introduced to my other socks, they were immediately corrupted and quickly began exchanging partners. 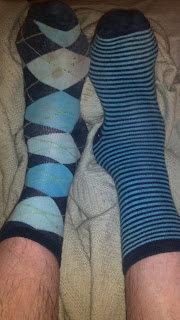 One night I was playing a rehearsal for the Master Chorale of Tampa Bay when Jo-Michael Scheibe was the conductor.  I was wearing mismatched pastel socks in public for almost the first time.

(As an aside, I was also wearing lime green biodegradable crocs at the time.  I loved those shoes, but I wouldn’t get another pair.  There is one significant problem with biodegradable shoes…)

Dr. Scheibe noticed and made me stand in front of the Master Chorale and show them my socks.  From that moment, everyone decided that socks were my “thing”.  People started buying me mismatched and outlandish socks.  Every birthday would include about three more. 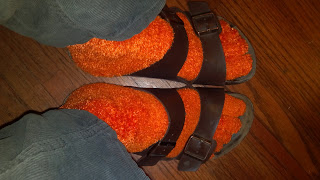