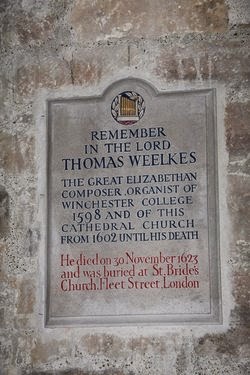 No matter how good you are at your job, you’re probably not as good at Thomas Weelkes. Weelkes was an English organist/composer in the late 16th and early 17th century. In 1616 he was reported as

Around this time, he was fined for urinating on the Dean of the cathedral from the organ loft during Evensong. He was apparently drunk and swearing loudly enough during a service that he was dismissed, but very soon after (!) was reinstated. A report sent to the Bishop says,

“Dyvers tymes & very often come so disguised eyther from the Taverne or Ale house into the quire as is muche to be lamented, for in these humoures he will bothe curse & sweare most dreadfully, & so profane the service of God … and though he hath bene often tymes admonished … to refrayne theis humors and reforme hym selfe, yett he daylye continuse the same, & is rather worse than better therein.”

Yet he kept his job until he died. It’s a new standard of excellence. He literally peed on his boss and showed up to work drunk all the time, and he never lost his job. How good do you have to be as an organist/composer to behave like that?! I mean how do those meetings go?

The dean says, “Look, he peed on me during the worship service!!!” The senior Warden says, “Yes, but he plays so well. We can overlook it this one time, right?” In any case, I think I need to practice some more.