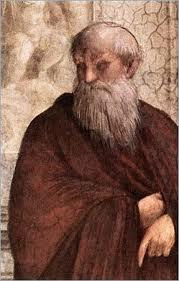 Whilst traversing the modest byways between two Universities on Lincoln’s adequate public transportation system, I have been re-reading some of Plotinus’ Ennead. I am certainly struck by the profound and detailed supernal vision he describes. It is easy to see why St. Augustine fell under his spell and borrowed so much of his language. I also find that his mystical approach to epistemology is incredibly relevant today. He complains that knowledge is misunderstood as “a mass of theorems and an accumulation of propositions, though that is false even for our sciences of the sense-realm.”

The idea that we “know” a thing by being able to explain its component parts is an argument that is still seductive. When we start by trying to explain the absolute uniqueness of a phenomenon by building it up from its pieces, it always seems like something is missing when we get back to the concrete reality of the form. I do like talking about the building blocks, but there is something that doesn’t ever quite contain the whole ontic nature of the thing in itself. The physicist Richard Feynman describes the limited nature of this sort of knowledge by saying suggesting that all scientific statements are a “kind of approximation to the complete truth.”

So, Plotinus says we need a wisdom that is not “built up of the theorems but one totality, not a wisdom consisting of manifold detail coordinated into a unity but rather a unity working out into detail.” This makes a lot of sense from an artistic perspective. I remember reading a Ravel quote one time where someone asked him about a piece he was working on. He said something like, “It’s all written except for the notes.” I find that idea very concomitant with my own creative process. I struggle with the whole. When that struggle is finished, I work out the details. I know of many other artists who report the same experience.

The big question for Plotinus is what does my “struggling with the whole” look like? Though there are some that claim that works have sprung, fully formed, from the head of Zeus, I just don’t think so. I think they are forged in the concrete reality of working with real materials. There is always something in Plotinus that can’t acknowledge real beauty here and now on this earth. For him, beauty is only a pale reflection of the true beauty in heaven. Maybe. This goes back to the old paradigm that William Barrett liked to call “Hellenistic vs. Hebraic” man. I heard an interview with Dr. Cornell West where he said something like this, “Blood and shit. Born of a woman. When you find someone that can love you in your blood and shit, that’s the real deal.”

Plotinus’ beautific vision is always a little too other worldly for me. It never really allows the wonder of a person or a work of art to exist in the concrete reality of this world. They or it are always only beautiful insofar as they reflect something beyond. There is always a qualifier. There is always an “insofar as”. I’m not sure that’s enough. I want to love people and make art in the incarnational reality of this world – in the “blood and shit”. I suppose this means that I don’t mind a mystical approach to knowledge, but Plotinus never allows enough of a mystical approach to concrete phenomena to allow them real participation in divinity.