Do you know what it means to miss New Orleans? Part 1 – the nose ring 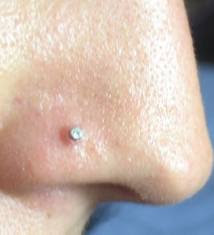 In the halcyon days of my late teens, $200.00 was enough money for big adventure. I had just finished playing a gig on a Thursday, and the cash was in my wallet. I found my faithful cohort Brian and said, “Hey, I’ve got $200.00. Let’s do something.”
“What do you want to do?” Brian asked.
“Why don’t we go to New Orleans?” I responded.
Brian said, “Let’s call Guyton and see if he wants to go.”
Guyton lived in Jacksonville which was about 3 hours from Tampa. From there, it was a straight 9 hours to New Orleans. On Friday morning, we began telling friends that we were heading out that afternoon. Brian wanted to add his own special, tangible memento to this adventure. He had been talking about getting a nose ring for a while, and he decided that it would happen that evening. When a mutual friend heard he was going to do it himself, she immediately said, “You have to get a potato…or a carrot.”
“What?”
“You have to get a potato or a carrot to put up your nose while you’re doing it, or else you’ll pierce your septum.”
So, we did our version of packing that afternoon. We opened the hatchback on my ’76 Nova and threw a bunch of clothes freely inside. We made the quick trip up to Jacksonville and went to Guyton’s apartment where Brian immediately asked for a carrot and three beers.

He chugged the beers as fast as he could while I began sterilizing a needle with a lighter. He approached the bathroom mirror, and as I handed the needle over, he gently inserted the carrot into his right nostril. You might think that a grown man with a carrot in his nostril is an inherently funny sight, and you’d be right; but, I can assure you that the humor of the situation compounds exponentially when he begins to gingerly attempt to push a needle through his nose. I was perched on the edge of the tub attempting to lend moral support. Brian’s eyes were fiercely determined as he began to insert the point of the needle into his tender flesh. Tears came to his eyes when the tiny spike had barely begun its short journey towards its vegetable goal. Brian’s seriousness combined with the protruding tuber proved too much for the ever titterable Guyton. He began howling and cackling from the bathroom doorway. Brian found that Guyton’s laughter was not a helpful encouragement for the mettle and concentration necessary to push a sharp metal object into his snout. He chased Guyton out and began a second attempt. The needle began boring it’s way down only to strike a small deposit of blood that began to trickle out in slow droplets. Guyton had somehow wandered back to the doorway. This time his laughter was too much for me, and I too began to succumb to the roaring. Brian once again removed the needle. He realized at this point that the atmosphere was completely wrong. As he chased Guyton out for a second time, he made him change the music from Harry Connick Jr. to Nine Inch Nails. New Orleans music would ironically have to wait for a more sanguine portion of the trip. The violence of the industrial music pushed him over the edge, and the needle began its furious quest with renewed vigor. As it pushed past the sedimentary layers of skin, it found the full reservoir of blood. As the gusher erupted, the blood flowed freely and mixed with the salt water of his tears that had formed into small cataracts which sought out the trails of his face.

After about 5 minutes, Brian turned to me. He held the needle in his right hand while his left maintained its fastidious grip on the carrot. His face was covered in blood and tears. In a slightly nasal voice, he said, “I got it. It’s in.” The needle and the carrot were removed. He only had an ear stud to put into the aperture. The ear stud had a somewhat larger bore than the needle and was every bit as painful to force through the small opening. About 45 minutes after the initial insertion of the carrot, Brian had a nose ring, and our adventure could begin in earnest. In the morning, when we woke up, we found a blood-stained, slightly mucous-covered carrot in the trash can and Brian sleeping with a magnificent ear stud protruding from a very red and swollen nose.