I was reading an article sent on by my friend Michael Baker about a new performance of Stravinsky’s Symphony in C. Michael was a student with me at SMU where we both did our Masters degrees. This sent me down a short memory lane to an iconography project that I did for Dr. Carol Reynolds. (She is now a freelance musicologist which is sort of like the freelance logician character in Ionesco’s Rhinoceros, except I think it pays more. You should check out her site here.) So, I was rooting around in the bowels of the library and discovered Robert Crafts

book with images of Stravinsky. Stravinsky always kept himself in good physical condition by doing gymnastics. Presumably, he didn’t have Schoenberg’s advantage of being invited over to the Gershwin’s house for tennis and was left to his own exercising devices. In any case, Stravinsky was impressed enough to preserve some photos of himself of which he was apparently very proud. 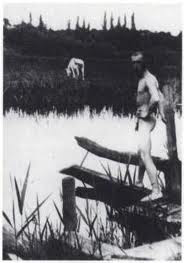 At first, of course, I thought that what made this picture special was the insouciant way his hands are resting on his hips. It didn’t take me long to realize that the real artistic touch in this one is the goat grazing in the background. At least I think it’s a goat. Professor Carol could probably tell us more about that.

In case the full monty wasn’t enough, here is the side view. I don’t know of any men that sit with their legs like that when they are in the buff, so I’m not exactly sure what he is doing. Clearly, he seems embarrassed because his head is turned away. I’ve always liked the contrast of these two images. Exhibit A shows no sense of embarrassment at all.

Since my discover of these two, I have also been exposed to this more well known gem. 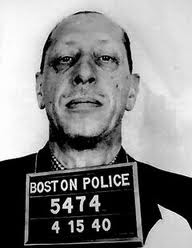 This one was not taken, as you might presume, when he got arrested with Pablo Picasso for public urination in Paris. As the picture indicates, this was the Boston Police arrest which was made for his harmonization of the national anthem. Apparently some folk din like his harmonicazations and thought he was makin’ fun o’ us, so he got to spend the night in the pokey. I always try to scare my harmony students with real world consequences of the part writing rules, but it never works. They always break the rules and wind up in theory jail too.