The “bugger for the bottle” meets a toilet in a museum 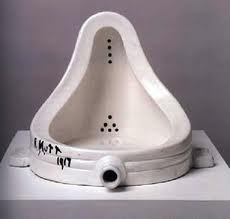 In book 2 of the Nicomachean Ethics, Aristotle continues Plato’s line of thought aand suggests that the ideals of art are centered around proportion. “Thus a master of any art avoids excess and defect, but seeks the intermediate and chooses this – the intermediate not in the object but relative to us.” This “relative to us” seems to be a little motion away from Plato. At least in my reading, Plato always seems to suggest that proportion is fairly universal when he uses phrases like “the art of measurement is universal.” Aristotle at least allows for the possibility of moving the standard from being centered in the object (or the ideal form of that object) to being in the human being.

He follows this passage by intimating a concept that is still with us today. “…we often say of good works of art that it is not possible either to take away or to add anything, implying that excess and defect destroy the goodness of works of art, while the mean preserves it; and good artists, as we say, look to this in their work.”

I have written elsewhere on this blog about proportion. The bigger issue here is that bit about it not being possible to “take away or add anything”. Aristotle has laid the groundwork for a bigger idea in this passage. The idea reaches its full height in the 19th century: there is such a thing as a masterpiece and you can’t mess with it.

I think I would like to tackle the masterpiece concept by first addressing some of the arguments against it. We have seen numerous attacks on the idea in the 20th century. To list a few examples that come to mind: Hindemith’s Gebrauchsmusik, some of the elements of the Bauhaus school that were aligned with the Neuesachlichkeit coming out of Paris (Cocteau et al.), the Völkisch movement, Dadaism, John Cage, Marcel Duchamp and found objects, and Andy Warhol’s pop art movement.

So, Satie comes on the scene and writes Vexations (c. 1890s) with the inscription, “In order to play the theme 840 times in succession, it would be advisable to prepare oneself beforehand, and in the deepest silence, by serious immobilities.” The piece lasts around 24 hours. John Cage publishes Vexations 50 years later and writes its ugly step child, Organ/ASLSP (As SLow aS Possible). Cage’s piece is being performed in Halberstadt, Germany and is currently scheduled to last 639 years. It apparently began with a rest that lasted for about 2 years. You can read about it (and listen if you dare) here.

I think it is interesting that when the masterpiece idea is confronted in a creative work, more often than not, it is proportion that gets the direct attack. I have had very good experiences with Cage’s work in my life, but I always run into the same problems and questions when I encounter it. So, to begin a discussion of the idea of a masterpiece, here are my questions about artists who deliberately set out to create an anti-masterpiece.

1. Why is it that when Warhol sets out to depersonalize and objectify “art” in the Cambell’s Soup Cans, he winds up creating a highly individualized, iconic 20th century art work that is associated with his personality?

2. As Norman Brown (Cage’s friend and regular critic) used to ask, if “everywhere you go is music, and everywhere you are is the best seat”, why do you need to organize a “Circus” event at all? Also, why do you get a private room to read your poems away from the chaos of everyone else?

3. Why do I enjoy performing Cage’s music more than I enjoy listening to it in the concert hall?

4. When I encounter anti-art, why do I always feel like I’ve had a philosophical experience instead of an aesthetic one? Also, why do I feel like Duchamp is lecturing me through a toilet? I mean, he put it in the museum. He didn’t bring the museum crowd to his house to look at the toilet there.

5. Why is it that when I encounter chance music or found object art, what I value most is when it conforms to a structure that I find analogous to works that are considered masterpieces? That is, isn’t it possible to have a poor performance of 4’33’’? (I performed it once with piano, trumpet, and electric bass the week that Cage died. It was OK, but too many were in on the joke, so it wasn’t that big a deal. It was a big time for the non-majors that showed up for that recital.) Immediately afterward, we said, “Wow, the second movement was really good, it really built to a climax!”