When we started dating, I had a white ’76 Chevy Nova with mag wheels.  The car fit my personality like an over-sized jacket, and I had to stretch out my machismo just to get my hands past the cuff links.  When my dad first bought the car for me, my friends and I had some difficulty in determining its gender.  The vehicle’s well-developed biceps fooled us momentarily.  After checking under the skirt, she was christened, “La Nova Cabrona” by a Cuban-American friend.  The passenger door could only be opened from the outside, which might have been used to some advantage. It turned out to be rather ironic because the number of girls who had actually dated me when I had the Nova was rather small.

The Nova’s defining moment came when we were in college together.  During class one day, my friend Brian snuck out to the University parking lot and attached a late 70’s style license plate with the words “Cute n’ Sexy” on the front of the car.  The words were airbrushed in that sickening manner that all artists of the compressed air genre seem to have ready at their disposal.

The three principle mediums of “airbrush artists” are the license plate, the T-shirt, and the van side.  An entire bastardized ouvre has been created by artists expressing themselves all over the place by means of hose and compressor. Brian had discovered an example sine qua non.  While the artist was clearly influenced by the so-called “unicorn” school, the piece managed to introduce a graffiti edginess while still maintaining a classic “space odyssey” sensibility.  I saw the license plate immediately after class and knew where blame was to be placed.

I found Brian laughing, but was unprepared for his next assault.  Brian was a cunning foe and had the advantage of knowing me since eighth grade.  I had expected a simple frontal attack, but he, aware of my weaknesses, had prepared a pincer move.  “Take that thing off my car!  I don’t want to drive around and have people looking at me with a ‘Cute n’ Sexy’ air brushed license plate,” I said.
“Why?  Because you don’t have the existential courage to drive around with that plate on the front of your car?” he quipped.

The blow fell true.  Despite the ironic situation of having to prove my existential freedom by doing something that someone else told me to do, I could no longer remove the plate without acting in “bad faith.”  Brian was standing there complete with his French beret, goatee, and horned rimmed glasses mocking me.  “He even dressed the part,” I thought.  I pictured Matthieu in The Road to Freedom stabbing that knife into his hand.  I could see Jean Paul Sartre himself saying, “Kurt, Matthieu could put a knife through his hand, and you can’t even put an air-brushed license plate on your car!”

Now, it happens to be the case that I am both “Cute” n’ “Sexy,” but I am not the type of person that likes to spend exorbitant amounts of time defending truths which are both obvious and self-evident.  However, for the sake of acting in good faith and announcing to all those motorists driving around the streets of Tampa that had not yet perceived these truths, I maintained my car-front placard for six months.  Each time I would exit the car at a convenient store, passers-by would immediately glance toward the emerging driver to see if the plate was warranted.  “He’s alright,” I could see them say, “but he’s not all that.”  After receiving a concession from Brian that I had fulfilled my existential duties to the point of supererogation, the plate was removed and placed in a prominent place in my bedroom to remind all that entered that my existential freedom had been tested in the fire and proved worthy. 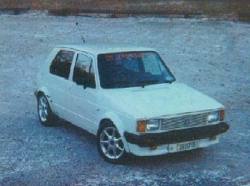 Jennifer brought a white Volkswagen Rabbit to our relationship.  Its ears were worn out, and its fur had faded in spots; but it could still hop around a bit.  Riding in the Rabbit whilst Jennifer drove was always a time of excitement in my life.  It was the same sort of thrill I used to get as a child when I was trying to perfect a new trick on my bicycle.  Driving the Rabbit was like trying to jump a makeshift ramp with your little sister riding on the handlebars.  If your timing wasn’t exact, there could be consequences for both you and the passenger.   The Rabbit was an adventure-mobile that could turn the simplest ten-minute drive into a thrilling safari.

Despite its general good nature and kind demeanor, it had two quirks.  We all have strange relatives and learn how to work around their idiosyncrasies.  “Don’t start talking to Uncle Joe about Tibetan alternative health techniques.” “Hide the fingernail clippers before cousin Bob gets here because he has a phobia,” etc.  The Rabbit’s first oddity was that it was an ardent socialist.  It hated to turn right for any reason.  Forward and backward were fine.  It loved heading to the left.  If you attempted to force a right turn upon the vehicle, the engine would become as quiet and motionless as a Quaker at an NRA meeting.

Jennifer would devise complex schemes for arriving at destination points.  By using a series of left turns, the car would become confused enough to allow you to reach a destination that was actually to the right.  This technique is well known to most socialist dictators, but it can work for navigating left-wing vehicles as well.  If a situation arose where a right turn was inevitable, a carefully timed procedure was required.  During the right turn, the driver would depress the clutch as the motor stalled.  With the clutch down, she shifted into neutral and allowed the car as much forward momentum as possible. She completed the procedure by shifting back into first, popping the clutch, and depressing the accelerator.  Restarting the car during right turns gave surrounding automobiles the impression that the Rabbit was as capable of bi-directionality as any Libertarian.  Accomplishing the right-turn-ritual while still maintaining control of the car was so mentally taxing that the driver occasionally forgot to say, “Lift!”

As with all left-leaning activists, the Rabbit eventually had a romance with environmental issues.  While frolicking in the salty bay air of Tampa, the Rabbit developed a rusty blemish where the windshield and hood greeted each other.  The melanoma turned out to be malignant, and the cancer bore a hole through to the interior of the car leaving its organs exposed.  The mighty rainstorms of a Tampa summer, when finding their paths unobstructed, felt obliged to deposit several inches of water through the small hole.  The waters formed tributaries that gathered into a wetlands area on the floorboards of the back seat.

One could walk across the parking lot on a hot summer day and see the ecosystem in the car functioning like an oversized terrarium.  Cumulus clouds would form in the back seat and drift to the front where they would rain down and become the tributaries that fed the wetlands.  This aqueous habitat gave the driver even more obligations than the perfunctory steering and right turn restarting.  Any braking motion required the driver to shout, “Lift!” for the passenger.  When you pressed the brakes on the Rabbit, a small tsunami would form on the floorboards of the back seat and rush forward to spend its fury on the back of your shoes and socks.  Regular passengers in the Rabbit became quickly acculturated.  It only required one experience of the “shoe and sock drenching” to develop an immediate reaction to the word “Lift!” from the driver’s mouth.  Eventually, it didn’t matter if the passenger was actually in the vehicle.  I could be sitting in a chair at home, and Jennifer would say “Lift!”  The word worked like the doctor’s rubber mallet on my kneecap, and my legs would suddenly rise up from the ground in reflexive response.

Those cars left us.  The Nova went off to help some at risk children confined in a Hillsborough County Sherrif’s Youth Ranch proving that she wasn’t such a “Cavron” after all.  The Rabbit scampered off to die in the woods somewhere, and Grandma Bean was kind enough to give us her old Crown Victoria.  We had no idea when we accepted the car that it would make us famous for a week in Dallas, Texas.